Showing posts from July, 2012
Show all

- July 31, 2012
While in Pensacola we enjoyed a great morning at the Naval Air Station.  We went to the National Naval Aviation Museum.  It is FREE admission and has planes, special exhibits, simulators and a nice kid's play area.  They also have a FREE 45 minute trolley tour to see other aircraft outside.  We did not have time for the trolley ride, but we did get to go inside the new hangar bay which had Vietnam era aircraft as well as a Marine One Presidential Helicopter.


The Pensacola Lighthouse and Fort Barrancas on the naval base as well.  You do need to make sure you watch the signs when driving on the base because there are areas where visitors are strictly prohibited.  You also need to show ID to enter.

After leaving Pensacola, we headed over to Orange Beach to show the kids where we stayed a few years ago.  It was very hot and we didn't have an umbrella or canopy to set up, so we decided to just let the kids build in the shade of the state park's pier for awhile and then headed…
Post a Comment
Read more

- July 30, 2012
We have visited Florida many times.  We've been to Jacksonville, Orlando/Kissimmee area, Tampa/St. Petersburg, Fort Lauderdale, Palm Beach, St. Augustine, Pensacola, Cape Coral/Fort Myers, and many roads in between.  But, we had never been to Tallahassee, the capital city of Florida.

So, on our way home to Houston, TX from Columbia, SC we decided to take a couple extra days and add Tallahassee to our route home.  We got up on Day 25 and headed over to the current Capitol and the Old State House that sits next door.  We parked nearby in a parking garage and walked over to the Capitol.  We found out there are museums around the capitol complex, including the Museum of Florida History that has FREE admission.  The Brogan Museum is near the capitol and is part of the ASTC passport program and FREE to reciprocal members.  They are currently in a period of transition at the museum.

The current Capitol is a tall building with a beautiful water feature and dolphin statues outside.  Across…
Post a Comment
Read more

- July 29, 2012
Our oldest daughter and I wanted to see penguins.  Riverbanks Zoo & Garden in Columbia is one of the zoos in the U.S. that has penguins and we couldn't pass up an opportunity to go while we were in town.  Once again, they are part of the AZA reciprocal program, so we saved $60 and got in for FREE.  Can't beat those savings!

The penguins were being fed when we entered the Birdhouse where they are housed.  It was fun to watch them swim and burst out of the water onto the land when they are done.  We also saw the Koalas again and one of them was holding a baby on their lap while they both slept.  They have a new Kangaroo Walkabout where you can walk through and there is nothing between you and the kangaroos.  There are a couple other zoos in IL and OH that also have walkabouts.  Riverbanks also has gorillas, baboons, African elephants, Komodo Dragons, giraffes and many other big and small animals.


Riverbanks is a great zoo.  It is not as big as the Houston Zoo, but it has a g…
Post a Comment
Read more

- July 29, 2012
We went to North Carolina to revisit some places we used to live.  It is always interesting to go back to places that were part of your past.  Our oldest was born in North Carolina and lived there until he was two, so we like to take him back and remind him of people and places he used to know.

Of course, a Hibachi grill can be costly and many charge extra if you share a plate with your child, so we opted for the less expensive and faster alternative in Gastonia, NC.  Sake Express is more of a fast food type Hibachi restaurant that offers great service at much more reasonable prices.  It did not disappoint.  The food was as delicious as I remembered it from our visi…
Post a Comment
Read more 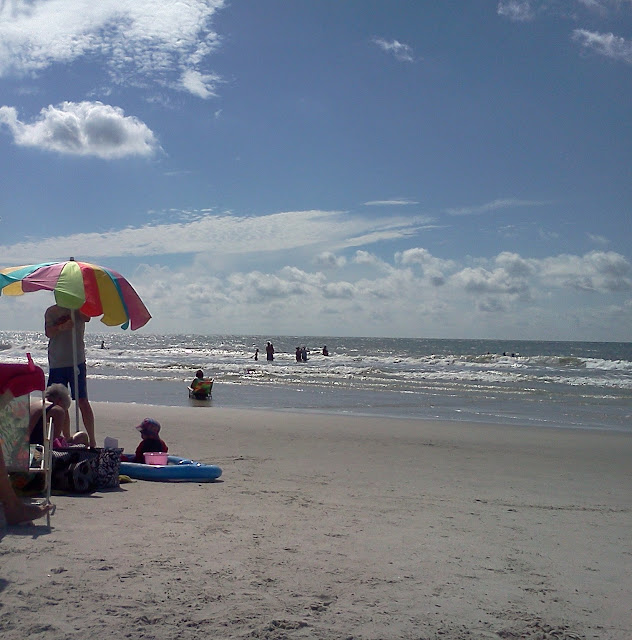 We are not "beach people."  We may go to the beach, but we don't live at the beach.  For eight years we lived about 30 minutes from the ocean, but we only went there a couple times a year to swim and sit in the sand.  We are a fair-skinned family of redheads.  Our children love to play in the sand, but would prefer a pool over the ocean.  I love to walk on the beach or just sit by the water and read, but with four kids neither of these are easy to do right now.

That being said, I really liked Folly Field Beach on Hilton Head Island.  It was convenient, not crowded, and cheap.  Now, parking is limited, so it is best to get there early to get one of the spots.  The nice thing is the parking lot is mostly shaded due to all the trees.  It costs $1/hour and the walk from the parking lot to the beach is short and easy.  They have a boardwalk area with bathrooms and outdoor showers as you head toward the beach.  Then it changes to rugs and mats that are laid out and fastened so…
Post a Comment
Read more

- July 24, 2012
Columbia, SC is a city full of things to do.  But, we headed out of the capital city to visit Hilton Head Island.  It's about a three hour drive.  I've been to Myrtle Beach several times, but this was my first visit to Hilton Head.  We got there Thursday afternoon, so after meeting up with my sister-in-law and her family, we headed to Jarvis Creek Park.


They had a nice playground, picnic areas, paved trails, a pond and plenty of shade.  There was also a dock where you could fish.


Of course, I went to see the alligators.

We saw two small alligators as well as lots of turtles and a large bird that didn't seem to care about the turtles or gators that were swimming near its perch.

Then we went to The Crazy Crab and gorged ourselves on delectable seafood.  I had the broiled seafood platter and it was SO good.  My husband and I split a bowl of the She Crab soup as well.  Having lived in Maryland for eight years, it wasn't the best I have ever had, but I still enjoyed it. …
Post a Comment
Read more 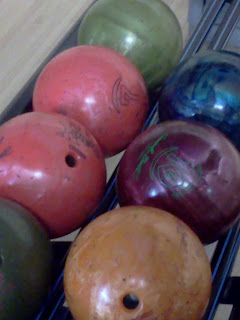 It was quite evident we needed to slow down after the hectic pace we had been keeping on this trip.  We are over half-way through, so the late nights, busy days and different eating habits is beginning to affect our attitudes and bodies.  So, we got up and relaxed at my in-laws home.  The kids were excited to play some video games, checkers with grandma and try out their new scooters on some walks around the neighborhood with their grandpa.

But, since I am not one for sitting around the house all day long, we decided to go bowling.  Our family of six went to Columbia Lanes, an AMF bowling alley, and played two games a piece for a total of $8.10.  Would you like to know how we went bowling for so little?

AMF has a wonderful summer deal.  Children 15 years and younger can bowl two games every day for free all summer long.  You just have to register them online and then print off the weekly voucher to show them.  We signed up with the AMF closest to our home in Houston, but it is good at…
Post a Comment
Read more

We had another long day of driving.  We left the Eastern Shore of Maryland, traveled south through Virginia, across the Chesapeake Bay Bridge-Tunnel and stopped to visit a cousin in Portsmouth.  I wish we had time to explore Portsmouth further.  I saw lots of neat shops and a sign for a children's museum that was hard to ignore.

From Portsmouth we traveled to Emporia, which was our normal place to stop for food, restrooms and fuel.  Our only regret was buying fuel there because just a couple miles south on I-95 there was fuel for 30 cents cheaper.  When we entered North Carolina on I-95 South I stopped at the state Welcome Center.  These are great places to get out and let the kids stretch their legs.  Our kids like to pick out a brochure or two as a free souvenir and most of them have something for kids.  Don't be afraid to ask.  I went into this one alone, so I asked if they had coloring books for the kids.  They provided me with four and would have given me crayons if I h…
Post a Comment
Read more

- July 18, 2012
We enjoyed a couple days in Salisbury/Fruitland, MD where we lived for eight years.  It was nice to visit and already see changes in the last year.  Since we had only a short amount of time, we spent most of it seeing family and friends in the area.  My parents and children did take a walk through the city park and FREE Salisbury Zoo.  Our 7 1/2 year old daughter agreed to be the photographer in my absence.


The Salisbury Zoo is a small zoo, but that makes it very manageable.  When we lived nearby we would visit on an almost weekly basis during much of the year.  We were able to learn the names of almost all the animals and because it is free they do need support from memberships and donations.  The memberships are very affordable, a great way to support the zoo and give you access to the zoo reciprocal program.  One of the zoos in the program is The Maryland Zoo in Baltimore.  A family membership at the Salisbury Zoo is $45 for 2 adults and 2 children.  Admission to The Maryland Zoo …
Post a Comment
Read more

- July 18, 2012
We have made many trips to Washington, D.C.  When we lived two and a half hours from the New Carrollton Metro Station it was a nice day trip option.  We have been to the National Zoo, the Smithsonian museums, the monuments on the Mall, Jefferson Memorial, the Holocaust Museum, Arlington National Cemetery, the National Archives, the National Gallery of Art and Ford’s Theater.  During a father-son weekend, my husband and oldest son visited the Spy Museum (admission costs), saw the Pentagon and FBI building from the outside (found out you can’t take pictures of the Pentagon) and saw the Iwo Jima Memorial at Arlington. The great thing about D.C. is that so much of it is FREE.
We normally ride the Metro into D.C. and walk, so we actually used it as a practice before taking all four kids to New York City a few years ago.  It is normally less crowded than the New York Subway, so it was a good way to test the kids to make sure they could follow our directions, stay close, get on and off wi…
Post a Comment
Read more
More posts