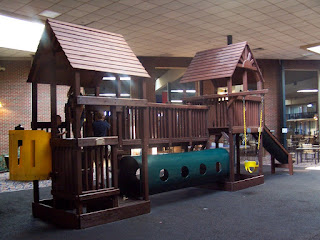 After playing on the indoor playground equipment at the Holiday Inn in Uniontown, PA, we headed to The Mountain State.  West Virginia holds a special place in our hearts because my husband’s family has ties here and his dad and other relatives attended West Virginia University (WVU).  A trip through the area is not complete without a stop at WVU in Morgantown.  Mountaineer Field at Milan Puskar Stadium is where the football team plays and they have a Hall of Traditions with displays about past players and teams, trophies, video footage and memorabilia.  The WVU Coliseum was also open, so we could walk through and see some displays on players like Jerry West, the NBA logo.  The new basketball practice facility behind the stadium also has a basketball Hall of Traditions and has videos as well as displays about famous players like Jerry West, “ Hot Rod” Hundley, and Rod Thorn.  Georgeann Wells was the first woman to dunk in a game.

From there we traveled towards Charleston, the capitol.  We took a short side trip to see Nutter’sFort.  It’s a small town that is part of my husband’s ancestry.  Thomas Nutter moved to America and first settled in Sussex County, Delaware.  His family moved on to Augusta County, VA, Fayette County, PA and then three Nutter brothers, Thomas, Matthew and Christopher built Nutter’s Fort in Harrison County.  A great triplearning idea is to see where your family and you came from.  It can be very interesting and educational to learn about your ancestors.  Evan went in to City Hall and was given a list of others who have inquired about the Nutter ancestry there and some books from past festivals. 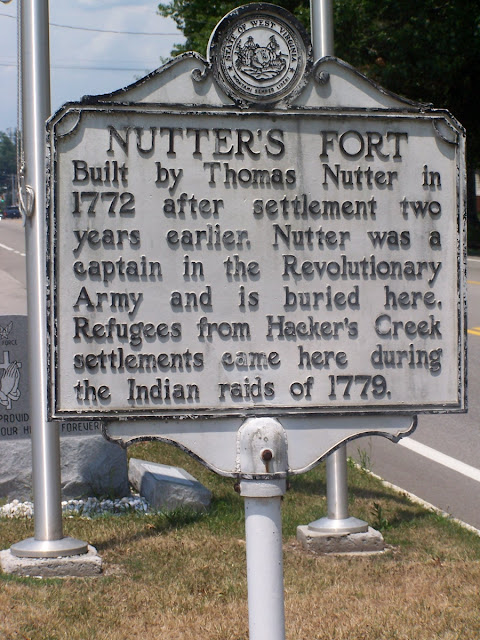 The capitol building in Charleston, WV is quite impressive.  It has a beautiful dome made of lead and copper with 23 ½ carat gold leaf over it.  They used lots of marble throughout the building and it was very nicely done.  We were unable to see in the House chamber because they had already closed it for the day, but we did see the Senate and they are very similar.  We also walked down to the Kanawha River across the street from the capitol.  When they picked the site for the capitol they had to remove several houses and they floated over a dozen of them over the river on barges to new sites.  We also saw the replica of the Liberty Bell that they were given.  Each state received one and some have them displayed inside or outside their capitol.  They also have several statues on the grounds, including one representing coal miners and four representing WWI, WWII, Korea and Vietnam veterans.  Their war memorial is surrounded by reflecting pools and walkways that lead inside to where names of West Virginians who died in each war are engraved.


Lastly, we drove to White Sulphur Springs to visit Evan’s aunt.  White Sulphur Springs is home to The Greenbrier and the recently played Greenbrier Classic, a PGA tournament.  We are looking forward to having some time to reacquaint ourselves with the town tomorrow and visit with family.
A Long Journey Free Outings State Capitols University Visits West Virginia