- July 04, 2012
To finish off our time in Memphis this morning, we made a stop by the Lorraine Motel.  This is the motel where Martin Luther King, Jr. was shot.  They have preserved the motel and built the National Civil Rights Museum around part of it.  The balcony where he was standing when he was shot is outside and you can walk up and see it.  Then the museum connects to the room, so you can go in the room and see what it looked like.  Normally the museum is closed on Tuesdays, so we thought we would just drive by and see the outside.  When we arrived we discovered they had temporarily opened it today to accommodate more travelers.  Unfortunately we did not have time to stay and tour the museum.  The website for the museum has a lot of resources to help with discussions as well as printable scavenger hunt sheets for various ages. 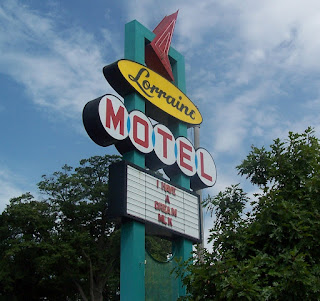 From Memphis our goal was to drive to the Quad Cities, two cities are in IL and two are in IA, where my sister and her family lives.  It is about a 9 hour drive, so we didn't have time to do much else.  St. Louis was our halfway point.

Our almost 8 year old daughter LOVES cardinals.  Because of her love of those beautiful red birds, she also loves teams that have cardinals as the mascot.  So, for her benefit we drove by Busch Stadium, home of the St. Louis Cardinals Baseball team.  That also meant we were close to the Arch and got to see it again.

Two years ago we stayed outside of St. Louis for a week and enjoyed several St. Louis attractions.  We went to Grant's Farm, the St. Louis Zoo and the St. Louis Arch.  We made a side trip up to Hannibal, MO to visit Mark Twain's home.  As we drove through St. Louis today I wished we had time to see one of their many museums or take a tour of a factory, but instead I took the time to remember the great places we saw the last time we were there.

So, today ended up being a lot of driving through Missouri and Illinois.  They are very pretty states, with rolling hills, fields of corn and other crops, cattle and windmills.  But, after awhile it becomes monotonous.  I was impressed that the Missouri Welcome Center had a large playground for kids.  It was much bigger than the playground at the Arkansas Welcome Center.  Otherwise, we entertained ourselves with music and comedians on Pandora's Free Android App.

In the end we made it to our family in good moods and we were able to have a small birthday celebration for my husband.