- August 24, 2012
After finishing our second day of school I decided to take the kids to the Health Museum in Houston's Museum District near the zoo.  It is free on Thursdays from 2-5 pm.  We only had about an hour in the museum and the time went by quickly.  We had been there one time before and even though it is a small museum we had a great time, saw new things and didn't get to do everything.

They had a new exhibit about cells that we had not seen before.  It used a lot of technology with touch screens, video screens and interactive displays.  It will be there until August 26th.  The next upcoming exhibit, Sonic Sensation, starts September 15th.

They also had brain teasers set up in the entry hall that we could have easily spent all of our time doing. 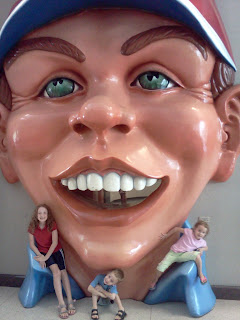 But, my favorite area is the Amazing Body Pavilion.  They give lots of information about different parts of the body and have a variety of hands-on displays.  It is great for all ages.

The large face welcomes you to the exhibit.  When you walk in there is a set of giant teeth to check out along with displays including vintage toothpaste, tooth powder and brushes. 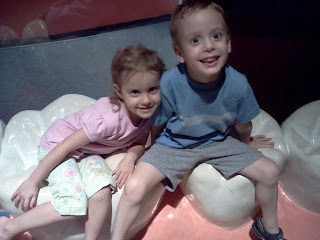 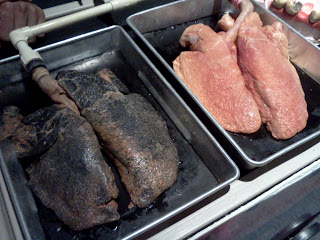 There were a couple docents standing with a display of lungs for us to see.  The lungs on the left were from someone who smoked 1 pack a day for 20 years.  The lungs on the right were from a healthy, non-smoker.  They had them hooked up to an air pump and slowly pumped air into them.  The healthy lungs inflated nicely.  The unhealthy lungs didn't expand.  That was probably the most disturbing and profound look at the effects of smoking on someone's lungs that I have ever seen.  I hope my kids remember it. 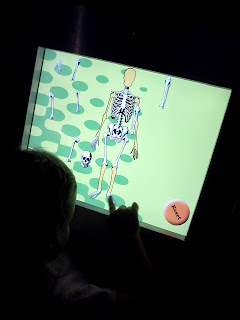 Even the four year olds found plenty of things to do at the museum.  Adah found this skeleton puzzle and did a great job putting the bones in the right places.


My favorite thing was the new scream booth where you can measure how loud you can scream in decibels and compare your number to other sounds.  My children said I had a higher number than the loudest recorded human scream.  I think I want an adult with me next time.


The kids were very disappointed that we ran out of time, but I assured them that we would go back again.